Last week, Netflix announced that they were going to make an animated shared universe based on Roald Dahl’s stories. While this confusingly includes the likes of Going Solo, Dahl’s second autobiography, for the most part it’s not as bad an idea as it sounds. Some of the books already have a shared universe (Wonka chocolate appears near the end of The Giraffe and the Pelly and Me, for example), and if they’ve gotten the rights to make Charlie and the Great Glass Elevator (which Dahl forbade to be made after he was dissatisfied with Willy Wonka and the Chocolate Factory, something which made 2005’s Charlie and the Chocolate Factory end without an opening for a sequel), they must be doing something right.

As you can tell, several of Roald Dahl’s stories have already been adapted as either movies or tv specials, and despite him being one of my favourite authors as a kid I didn’t watch as many as I could. That isn’t to say I didn’t watch my share: I liked the two versions of Charlie and the Chocolate Factory as well as Matilda as a kid, I watched BBC’s version of Esio Trot when it aired, I saw Fantastic Mr. Fox in theaters and came out unimpressed (and this movie is one I want to get to again soon), and I had the DVD for this week’s movie. I can’t say I was overly optimistic going into it, due to remembering extremely little and knowing that I chose to watch the other movies much more than this one. But then again, this movie got a standing ovation by Dahl at its screening, so it can’t be that bad, can it? 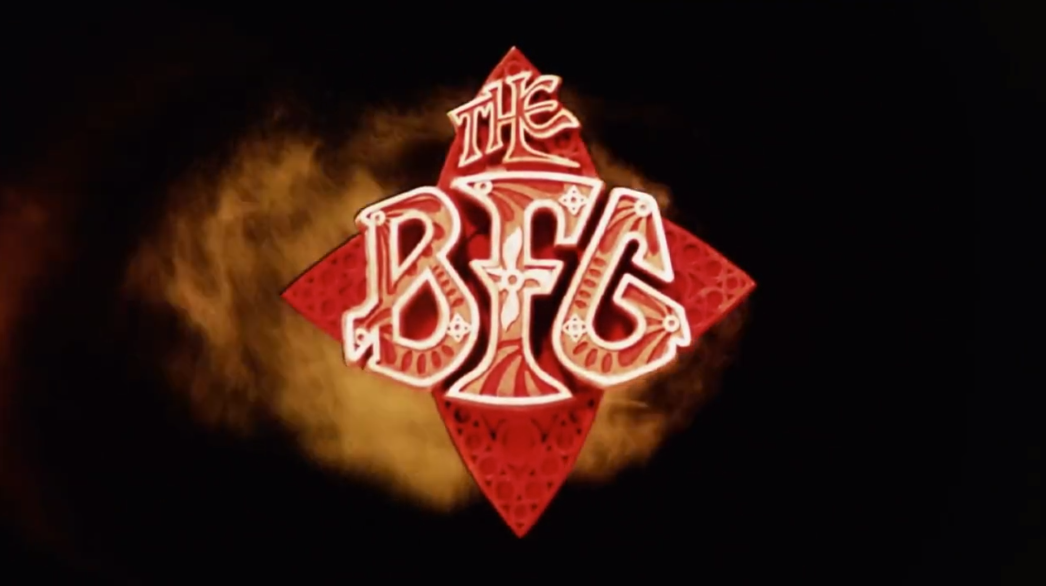 The BFG is an animated family movie adapted from the Roald Dahl of the same name. After Sophie witnesses the Big Friendly Giant (almost always simply called BFG) blow a dream into the window of a nearby house, she is whisked away by him to keep him secret. After learning that he doesn’t eat children (unlike the other giants of Giant Country), she is introduced to his world through the disgusting snozzcumber, the delightful frobscottle, and dream catching. After another dream blowing session is interrupted by a giant coming to eat children who live near Sophie’s orphanage, she hatches a plan to try and bring an end to their terror.

Obviously, no adaptation is a perfect 1:1 to its source material. However, this movie does come pretty close. It has been a while since I’ve read The BFG, admittedly, but nothing plot relevant seems to have been removed. Hell, they even had Sophie witness a kid get eaten by a giant, albeit off-screen. The only things I can think of being removed is a scene where the BFG gets all the other giants to fight each other, and unfortunately my favourite joke from the end of the book (which is completely understandable due to its dark matter, but has the dry British humour which is just perfect for the story). In exchange, some scenes have been extended. The finale has been changed to better benefit a movie, there’s a red rat-like creature that is introduced to the movie that has its existence justified in the climax, and drinking frobscottle has been given a song (which I’ll get to in a moment). While the resolution of the film remains generally the same, what happens at the very end is changed to better fit a movie, and I see no real problem with it.

Overall, the source material is incredibly imaginative, and the movie does an excellent job in capturing it. However, much like the original story is largely about Sophie learning about Giant Country, the majority of the movie is world building. This can be fine for some people, and for others make the movie feel like it’s dragging on. But personally, I was left with a feeling that nothing much of substance was happening. I feel that you could boil down the important parts of the plot into about the same length of an average tv episode, about 30 minutes. It wouldn’t be very good, but it would be possible. This means that the majority of the movie ends up feeling like filler. This didn’t stop me from enjoying it to some degree, but overall I feel the story fundamentally works better as a book than a movie.

Now. The frobscottle song. This movie has a couple of songs, most of which I completely forgot beforehand and can’t remember the tune of even while writing this review. They’re fine, inoffensive, but literally just serve to extend a scene which would probably only take a few seconds to a couple of minutes. Whizzpopping (named after what frobscottle does, which in human terms is farting hard enough to propel yourself through the air) is much the same in its purpose. However, this song is one I locked into the recesses of my mind long ago, and now that I’ve watched this movie again? I can’t for the life of me get “Whizzpop, whizzbang, feel the bubbles go down” out of my head. Is it a good song? Eh, it’s alright, though the verses can be hard to understand through the BFG’s accent, especially the first with its fast paced talk-singing. As such, it doesn’t mean much in the grand scheme of things, but consider this paragraph a warning regardless. If you watch this movie, this song will never exit your head. You may think you’ve forgotten it, but it’s only a matter of time before it emerges again.

On the visual side of things, this movie is distinctly cheap. I thought it might be due to when it was made, but no, this was the same year as The Little Mermaid and All Dogs Go To Heaven. It does that trick you often see in older cartoons such as the classic Hanna-Barbera titles, where they have a painted backdrop and animate the characters over that. However, they never go out of their way to make these backdrops particularly dynamic or interesting. The only time there’s anything moving is with this strange vortex which appears at the beginning and whenever someone is going from England to Giant Country, though what it really is is never explained. Besides from that, there’s a London street, the inside of the BFG’s home, the barren Dream Country, the barren and drab Giant Country, and the inside of Buckingham Palace. Besides from the latter and the BFG’s home for the first few minutes when you’re first shown a part of it, none of these are overly interesting to look at.

As a result of this, as well as how there’s rarely more than two characters on screen at any given time, the movie can feel almost static at times. This isn’t helped by most of the human characters (including Sophie, the only human character seen for a good two thirds of the movie) being relatively stoic. They emote just fine when they need to, but for the most part their expressions seem mild. Of course, this could simply be because the other major figure of the movie is the BFG. Thanks to having a much larger face and overall frame, he has an almost impressive amount of detail for the animation quality. Mixed with his emotional extremes, he demonstrates a wide range of exaggerated emotions that the rest of the characters sorely lack.  But for some strange reason, some characters having such cartoony expressions would be impossible. While most of the characters in the movie are drawn in the established style, when the Queen appears she is drawn seemingly intent on keeping the likeliness of Queen Elizabeth II. This alone would be understandable, albeit standing out from the established norm, but then the soldiers seen later are also drawn to be closer to real life than a caricature. It’s almost infuriating, because I can’t seem to find any explanation on exactly why they chose to do this. Maybe they didn’t want to insult the brave men fighting on Britain’s front lines against the well known giant threat? I don’t know.

While The BFG gives everything you’d want from an adaptation of the story, that includes a plot that doesn’t lend itself overly well to a film due to its emphasis on world building. Mixed with the cheap animation, you’ll come out of the movie with no significant impression, except for “Whizz pop, whizz bang” plastered on your brain. If you don’t want to see The BFG on-screen, there’s nothing here for you.

Do you remember watching this movie? Want to tell me how the 2016 movie fixed everything I complained about, or anything else? Please leave a comment!