Well, it’s Halloween. And in spite of only starting this blog four weeks ago, I feel obliged to join in on every other reviewer in making seasonal reviews. Thing is, I hate horror. Granted, I haven’t seen that much, but I don’t want to. I don’t like being scared, I remember being kept up at night just from the intro to Grizzly Tales for Gruesome Kids, I had to frequently pause The Sarah-Jane Adventures when they were doing a scary episode, horror and I just don’t mix. And yet, I was obsessed with one thing as a child which perfectly lends itself to my inaugural Halloween review: Scooby-Doo.

This is one of three Scooby-Doo movies which were created for the Hanna-Barbera Superstars 10, ten movies created to air in 1987 and 1988 before quickly receiving VHS releases. And while I don’t remember owning this one like I did Reluctant Werewolf and Alien Invaders, it did air often enough on Cartoon Network or Boomerang that I did watch it several times. And according to TV Tropes (obviously by no means a verifiable source, but still a starting point on how it was received), this is one of the more well-liked movies from the Scrappy-Doo era, even if it is more due to the supporting cast it creates. This claim does seem to have merit, given that they’ve recently made an appearance in OK K.O.! Let’s Be Heroes with several references to their movie. But of course, just because it’s the most fondly remembered, doesn’t guarantee something’s going to be good. 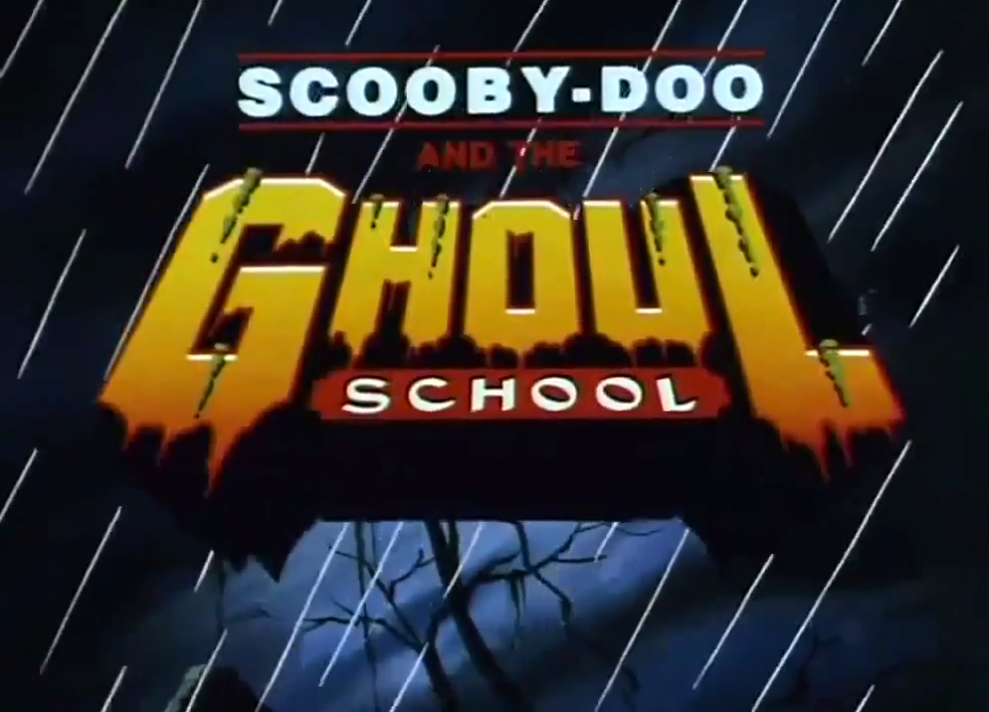 Scooby-Doo and the Ghoul School is a made-for-tv movie that first aired in 1988 on The Funtastic World of Hanna-Barbera block. It follows Scooby, Scrappy, and Shaggy shortly before and during their tenure at Miss Grimwood’s Finishing School for Girls, where Shaggy’s signed on to be a coach. They quickly realise that all of the students of the school are monsters, and reluctantly stay on due to having already signed a contract. There, they come to know their students, help them in a volleyball game against a rival military school, and end up trying to protect them from a witch seeking to use them to become the greatest monster in the world.

Scooby-Doo and the Ghoul School was one of the Scooby-Doo movies/cartoons made between 1985 and 1988 that had Shaggy appear with a red v-neck and jeans instead of his iconic green v-neck and brown trousers. While this admittedly means nothing on its own (we haven’t even been given a reason for the pallet swap), it does give context to the main cast. Fred and Velma are nowhere to be seen, and Daphne has left the cast at some point between The 13 Ghosts of Scooby-Doo and this movie. Instead, we’re left with Shaggy and Scooby, as well as Scrappy. And despite his reputation, I didn’t find Scrappy annoying in this movie. I didn’t come to hate his voice, he didn’t exist just to be captured or serve any negative role in the story, he was just as good a character as Shaggy and Scooby. However, that’s not a good thing. In spite of this being a Scooby-Doo movie, they have very little purpose in it. Sure, Shaggy being signed on as a coach acts a framing device to bring about the school, but they could’ve fled as soon as they realised that all the children were monsters and a grand total of three things would’ve been changed. And not only is there nothing that requires the trio in particular to do these things, meaning they could’ve been replaced with original characters with no detriment, but they could’ve been easily changed to get rid of the need of a ‘coach’ character at all, with the exception of bringing someone normal into a strange and supernatural situation.

So if the three pre-existing characters don’t bring anything to the story, what about the students of the titular Ghoul School? Sibella is the daughter of Dracula who replaces every possible word to contain ‘fang’ or ‘bat’ (‘fangtastic’ being the most frequent one, Winnie is the daughter of a werewolf, Elsa Frankenteen was created by Frankenstein’s monster (called Frankenteen Sr. in this movie), Phantasma is, somehow, the daughter of a phantom, and Tanis is the daughter of an Egyptian Mummy. While this might sound like an interesting cast on paper, there’s the problem that what I’ve written is literally all there is to the characters. None of them go through any sort of development, none of them have backstories beyond at some point being sent to this school, and I can count the times that they’ve had a major impact on the plot on a single hand. And you may be thinking that, since that’s 8 characters so far with very little impact, any other side characters must be driving things forward. But each of them are as interesting as everyone before them. The school faculty including Miss Grimwood herself have very little definitive personality. The Calloway cadets from the nearby rival school might go through some semblance of a character arc, but they all have the same personality which isn’t much more than responding to everything with ‘affirmative’ or ‘negative’. The main villain, an evil witch called Revolta, has by far the most impact on the plot, yet she has the complexity of, well, an 80s cartoon villain.

This all surmounts to my single, biggest problem with this movie. It is a movie where nothing happens. As I mentioned before, the only character development that happens is with the boys of the rival school, where they realise shortly before the finale that maybe they shouldn’t abandon girls to incredible danger and go to rescue them at the last second. And also as mentioned before, Revolta has the only major impact on the plot, using her hypnotising powers to gather the girls with the intention of making them all her eternal slaves which, though some unclear reason, will make her the greatest monster in the world. But that’s it. Everything else in the 90 minute runtime is pure padding. They don’t even make jokes out of it: There’s scenes where everyone is in tutus doing ballet, scenes where they’re going for a run through a bog, and so many scenes where they just replace a word with another word or pretty much state a fact about what they’re doing. Yet none of them have any care put into them. Just the fact that Scooby’s in a tutu, or that Phantasma can just run through the tangled roots of a bog, or that Sibella said ‘fangtastic’ for the seventh time is supposed to be funny enough. Even the one more imaginative joke at the beginning, where Scooby points out the text during the intro sequence, I didn’t find at all funny.

And yet, in spite of having no jokes or even that much plot, there’s a strangely large amount of story. The best way I can describe it is with some of the Disney straight to DVD movies, like Tarzan & Jane and Belle’s Magical World. The ones where they prepare a cartoon series based on one of their movies, have it cancelled, but still take a few of the episodes and try and turn it into a 90 minute experience. There’s three or four distinct parts to this movie: Scooby, Shaggy, and Scrappy arrive at the Ghoul School and help them in their volleyball game, there’s an evening where all the fathers come to the school and meet the trio, and Revolta actually enacts her plan to abduct and enslave the children. None of them are really needed to support the other, and only the latter has any purpose in the grand scheme of things. I didn’t find anything to support this, but this movie does feel like it was planned to be a short tv series, maybe even a follow up to something like The 13 Ghosts of Scooby-Doo. And I can’t even say that it would’ve been good as a tv show, again there’s a distinct lack of humour that I doubt would’ve been fixed by stretching material across an extra 9 episodes, but at least there’d be a chance for the characters to become more developed.

But despite this, I never ended up hating what I was watching like I did with Ozzy & Drix. Sure, the animation is decidedly weaker, due to both being older and the classic Scooby-Doo style this movie employs not really lending itself for any quick action as opposed to slapstick. And sure, it was boring, and I never had any strong emotional reaction to it except mild shame that I used to enjoy it. But then, at the end when the day is saved, they have a dance party. And during that dance party, they have a rap. The Scrappy Rap. Everything I said at the beginning of the review of not hating Scrappy doesn’t apply here, mainly due to the fact that it’s a rap in name only. Sure, it rhymes, and it’s said with music in the background, but it contains no real complexity, attention to pitch, or anything that makes a rap good. It’s little more than just a spoken poem, with very basic and boring dancing happening in the meantime. But for as terrible as this part is, it’s the only part that does loop around into being so bad it’s good. Does that make the movie worth watching? Not at all. But it does make me wonder if the entire movie would be better if watched with some friends to mock it constantly. After all, just because the movie refuses to make jokes, doesn’t mean you can’t make your own.

A dull movie where, in spite of plenty of potential stories, nothing happens. It’s by no means an unpleasant watch, but you’re not going to get anything out of it except for one extra reason to dislike Scrappy. If you have some friends and a good amount of alcohol, you might want to try riffing it, but otherwise watch the O.K. KO! episode to see what could’ve been if some effort was put in.